You can see it in every meticulously-crafted home he builds – J. J. Luebbe loves construction. Whether he is brainstorming the best way to improve a kitchen, assessing the accuracy of detailed trim placement or dreaming up a new specialty feature, Luebbe eats, sleeps and breathes homebuilding. His passion for building drives him to go above- and-beyond on every project, infusing each square foot with quality workmanship.

“I love what I do,” says Luebbe, president of Luebbe Fine Homes. “I’ve been a builder since the beginning. As a kid, I had a passion for building two-story tree houses.”

To his business today, Luebbe brings the same imaginati?on and enthusiasm that once drove him to create elaborate tree houses complete with trap doors and pulley systems. Luebbe Fine Homes, which he co-owns with his wife Connie, builds fully custom, one-of-a-kind homes designed to meet each client’s unique tastes and ideas. 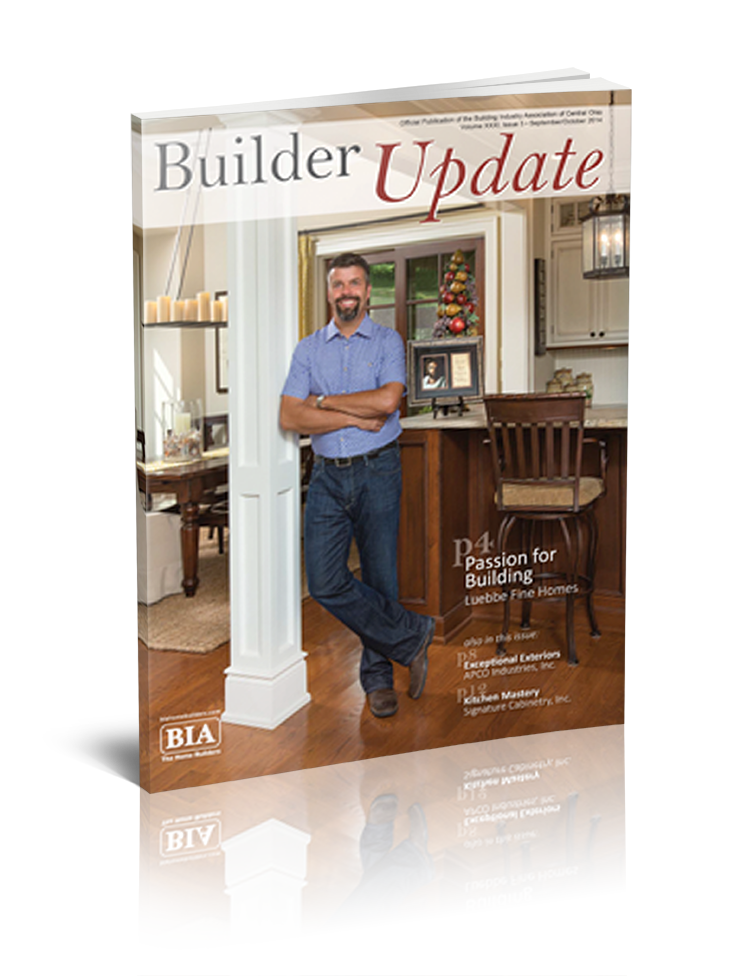 A trained carpenter who founded his business in 1996, Luebbe has built more than 350 homes from the ground up.

He capitalizes on his detailed understanding of homebuilding — and uses high-caliber materials and building techniques, plus highly-skilled craftsmen – to create especially well-made homes.

Luebbe has a distinctive philosophy — he wants to be your builder for life. This means helping homeowners after the sale with everything from repairing storm damage to remodeling their bath to building their next home.

For example, after Luebbe Fine Homes built her new Columbus area home, a client told Luebbe that she wished she could find someone she trusted to make repairs in her other home, in Ft. Meyers, Florida. Intrigued, Luebbe asked her for more details.

“Within two months, I traveled to Florida and had all of the repairs completed. I even fixed items that were not on her list, since I was already there,” he says. “I have been back for a second trip to take care of maintenance items. Needless to say, I’m now her builder for life.”

Luebbe Fine Homes builds homes startng in the mid-$400s to well over the million-plus range. Hammer & Brush, another division of Luebbe Companies, maintains, renovates, and restores finer homes with discerning clientele. Whether it is upscale remodeling, creating a finished lower level, or an elaborate addition, Luebbe carries the same custom-build philosophy throughout all of his projects.

His company is set apart by its ability to create spaces that meet their buyers’ specific needs — no matter how unique. “We do a lot of hidden rooms and specialty things,” says Luebbe. These include cleverly concealed safe rooms, as well as wine cellars, elevators, and unusual countertops and cabinetry.

Luebbe, who also does commercial building, once applied his knowledge of steel structure to a home where the owners wanted the entire second floor to be open. He used steel beams to create an airy space with no interior walls.

Working closely with buyers, Luebbe Fine Homes builds highly-individual homes that reflect his clients’ vision. The company’s building process is as personalized as its results. The first step is a builder- client meeting that focuses on what a buyer likes — and doesn’t like – about their existing home. Luebbe uses this input during the design phase.

“I like to visit my homeowner’s current home,” says Luebbe. “I ask them to make a list of the things they absolutely love about that home and a list of what they can’t stand. We also have them make a list of their wants and must-haves.”

The company creates homes that vary according to each client’s preferences, and as a result the home styles they build run the gamut.

For example, Luebbe Fine Homes is currently building a lavish, 8,000+ square foot Tuscan-style home in Colts Neck, priced over $1 million, with a drama?c exterior. At the same time, the company is building a story-and-a-half home perched on Choctaw Lake in London, Ohio, that is poles apart. Outside, the home looks like a cozy cottage but inside the owners will have 3,500 square feet of expansive living space.

Recently Luebbe Fine Homes completed another contrasting home, a 3,000 square foot modern farmhouse in Granville. The home features beautiful cherry hardwood floors and Amish-built walnut kitchen shelves that look as if they could float off the wall.

Luebbe, who grew up in Pataskala, wanted to be an entrepreneur since he was 12 and went into business with a friend. The two taught themselves to do home repair and performed small fix-it jobs for their neighbors. Luebbe found he enjoyed everything construction-related. While he attended The Ohio State University he also worked as a remodeler – and realized that he wanted homebuilding to be his career.

In 1990 Luebbe took a job at M/I Homes where he quickly rose from punch-out person to superintendent. Luebbe racked up a sky- high customer satisfaction rating at M/I and was soon recruited by Ryland Homes.

“Working for these builders, I learned systems, organization and the proper process in home construction,” says Luebbe. “My experience has helped me know how to keep things moving during the homebuilding process.” Today Luebbe uses this understanding to make his company’s process run efficiently, even while building large and luxurious homes, so his buyers have shorter waiting times.

When Luebbe, an accomplished carpenter, first started his business, he did all of his own trim work and cabinetry. He still maintains a keen eye for wood elements, but today he works closely with an elite group of long-time trade partners. They share a basic philosophy: ensure the work is done right. “My subs will step up to the plate,” he says.

Luebbe’s wife Connie, a partner in the business, handles the company’s finances. She also plays a key role in creating a team atmosphere – and occasionally brings her wonderful homemade baklava to the job sites for workers to enjoy during breaks. “It gives people a chance to just stop for a minute, sit down and talk,” says Luebbe. “It makes for a good community.”

With a strong focus on his clients’ needs, Luebbe is as invested in their homes as they are. He enthusiastically zeroes in on the details that will make each home theirs.

For example, when a house is first staked, he often meets with the buyer at the home site. “We’ll all go out and stand where it’s staked and I’ll say, ‘you’re in the family room and this will be your view out the window.’ If they want a different view we’ll change the entire position of the home to give them the view they want.”

Building durable homes and creating solid relationships with his clients are all part of Luebbe’s code of high standards, which includes integrity, honesty and accountability.

Recently, one buyer emailed to say: “I walked through this morning and was ecstatic about how things are looking! The drywall is incredible. Seeing you and your team’s work today excited me all over again and made me at peace after a long week.”

Says Luebbe: “This is the kind of relationship that I desire to build with my clients. Building homes is not what I do, serving people is what I do. I’m here to give people a better product and help improve their lifestyle and improve their peace.”

LUEBBE COMPANIES IS A PROUD MEMBER OF:

Signup to receive our newsletter and you’ll get tips, announcements, and offers that could help your home!